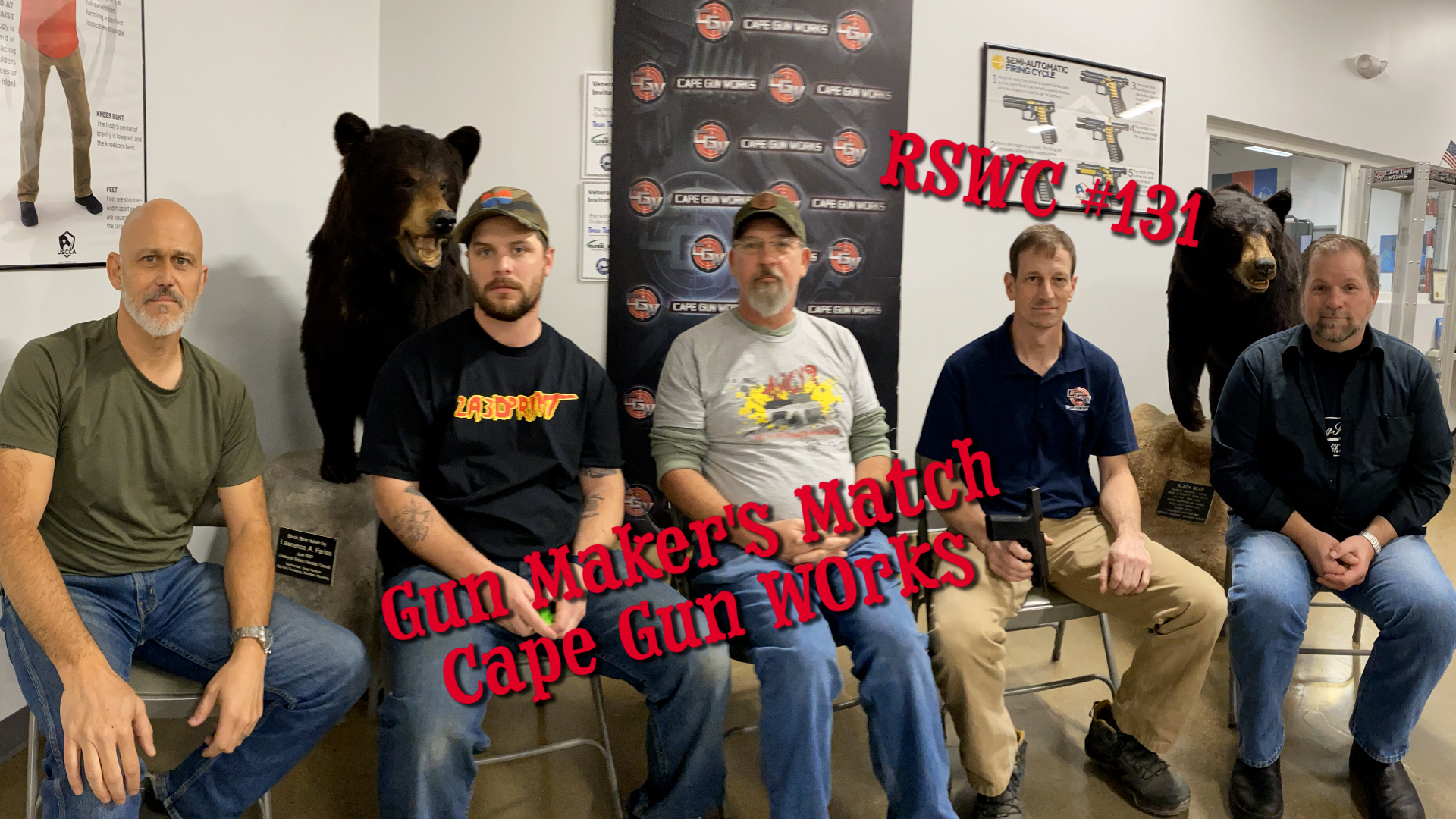 I got a text message from Rob Pincus (RSWC #063) about the Gun Makers Match at Cape Gun Works in Hyannis, MA, asking if I was going to be making the match. I had to work on the day of the gun making, but I made it to the shooting competition. Sort of. They started at 8 am and I didn’t get to CGW until 11:15 am so I missed everything and everyone. Rob, Toby Leary, CGW owner, Matt Holmes, 2A3D Print, and Bobby Brown, AWCY?, were still hanging around.  So we pulled 2 mounted bears that CGW has in the store and filmed what we called “Between Two BeARs”, a spoof of “Between Two Ferns”.

The weekend consisted of one day of gun making and a morning of shooting competitions. This was the 3rd Gun Makers Match that Rob was leading. There’s going to be a National Match in St. Augustine, FL, in March 2022. And Toby said Cape Gun Works will host an annual event, too.

Day One was building several P80s that were brought by Matt & 2A3DPrint. Bobby came from Florida to talk about 3D printing of firearm frames. Jon Green (RSWC #030 & #034), Director of Education at Gun Owners Action League, talked about the legalities of making a firearm in Massachusetts.  Once you have a completed home built firearm in Massachusetts, it has to be reported to the state via the eFA-10 registration portal. Yeah, this is ridiculous, but as I often say “Welcome to the Commonwealth”.

The tools used, according to Toby, are things that most people have in their basement toolbox. Matt, Rob, & Bobby were able to help the class participants with everything that needed to be done to build the P80s.  There were several folks doing their first builds and a few people that brought some previously made firearms.  There were even a few people who brought some 3D printed frames from home.

Day Two was the competition.  Toby Leary came in first place, but they said it’s because his GLOCK 34 has a longer barrel. Jon Green came in second. I believe that Joe Morse (RSWC #106) from Shooting Gallery New England came in third. Matt 3D printed some trophies of a 3D printer printing a frame. The winners each received a trophy.

It looked and sounded like a great weekend!  I’m bummed that I missed it. I will plan on making it next time, for sure! Filming a panel was a little different and certainly a different way for RSWC to happen, but I’m glad I got to get some video and learn about the 3D firearm printing world.

Rob: “We’re giving them a fun place to show them off. And give them a competition.”

Rob: “If everyone says ‘ghost guns’ are bad and scary and nefarious, it hurts our hobby. It hurts our ability to exercise our freedom and enjoy our freedom.”

Matt: “People are intimidated for whatever reason…It’s really easy to explain to people how they work, how to check function, how to check safeties.”

Toby: “I got accused of cheating because I used a GLOCK 34 and they said the muzzle of the gun was touching the target.”

Toby: “We literally brought tools that are in pretty much everyone’s basement toolbox out here and built guns with them.”

Bobby:”We want to make designs that never existed. We want to take existing designs and make them into something else.”

Are We Cool Yet? AWCY?

The files are on odysee: https://odysee.com/@AreWeCoolYet:7

Guns For Everyone National

Citizens Committee for the Right to Keep and Bear Arms

Please support the Riding Shotgun With Charlie sponsors and supporters.

Or listen on:
iTunes/Apple podcasts