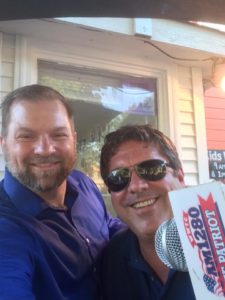 Mark Walters is the host of Armed American Radio.  Before that, he used a firearm, without firing a shot, to stop the commission of a crime.  That story lead to him writing for the United States Concealed Carry Association. Which lead to Armed American Radio. AAR is now an hour long daily syndicated radio show on over 200 stations.  He also has a “monster broadcast” that’s 3 hours on Sunday evenings.